My word, it has been downright hot here. Sultry. Except for the thick layer of all the crunchy brown leaves, it could be spring. You know those people who are so prompt and responsible about cleaning away their fall leaves? We’re not those people. This was appreciated by my little granddaughter yesterday, who delighted for the longest time using a child’s rake, making fluffy leaf piles and jumping into them. I don’t have a picture because I was too lazy dozing on the porch.

This surprising iris has bloomed more in the fall than the spring. The bee kept moving his legs, as if he were doing a warning dance, but he never appeared aggressive. I left him alone, he left me alone. 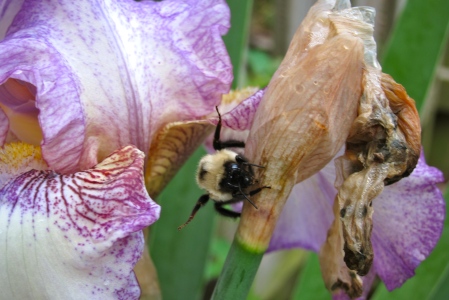 Unlike these wasps. I didn’t see them, was simply putting water in the pond nearby, when they started dive-bombing me. I got out of the way! The outer-space type balls are the blooms of a fatsia bush. 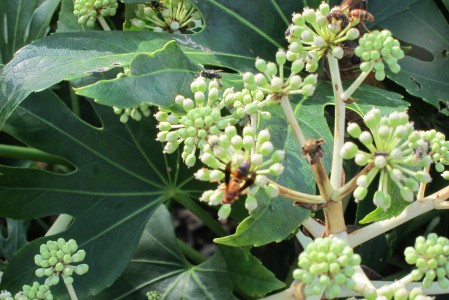 I’m told a frost triggers camellias into bloom. We have ruby and white. I’ve noticed that the white variety seem to cascade in a delightful fashion. Must watch out for stinging critters on them, too! 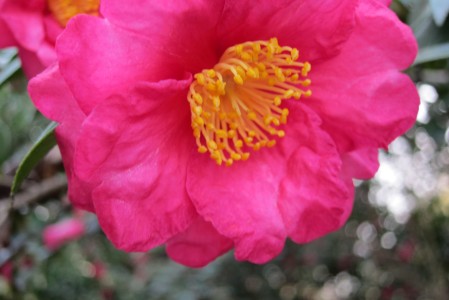 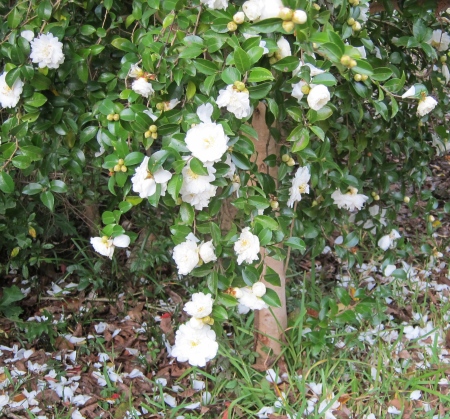 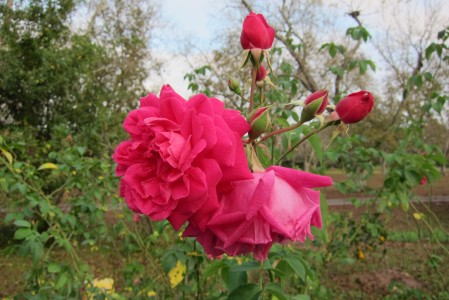 I’ve been thinking about my grandmother the past few days. My mother’s mother. We called her Honey. This morning when I got dressed for church, I looked in the mirror and there was Honey staring back at me. Disconcerting, but I could do worse.

What has gotten me thinking of Honey and other long-gone relatives was a book I’m reading: What Southern Women Know About Faith, by Ronda Rich. Ms. Rich tells stories of the women in her family, of strong, faith-filled women and the old traditions of church, Sunday dinners, prayers, lots of wise advice from mothers. It’s very homespun and warmly written, a comforting type of book, and I’m enjoying it.

Ms. Rich apparently had a family and childhood many of us would have liked but that many of us did not have. My own southern childhood was nothing like what Ms. Rich relates. My people were Southern to the bone, could trace their beginnings back to earliest times in North Carolina– to know ‘who your people are’ is very important in the South. The women of my family knew the codes of don’t smoke in public, the perfectly set table, don’t wear white, open-toed shoes until Easter. But they were nothing like the picture of the homey, faith-filled women who said hopeful things like, “Trust in the Lord,” and “Let’s pray about this.”

My own parents were not church-going people. What constituted faith teaching from my mother consisted of being taught the Lord’s prayer. Perhaps that’s more than many a girl has gotten.

Except for a few times when a small child, I did not go to church until my teens, when I chose to go with Honey. She was heavily involved in her church, but this all seemed more on a social level to me, rather than spiritual. I don’t recall ever hearing her mention turning to the Lord or seeing her pray. (She wasn’t a cookie baking grandmother, either, but one who wore very fashionable clothes.) Perhaps my memory is faulty, but one rather critical situation where she might have prayed does come to mind. It was an incident where she might have displayed a good example to lead in prayer, however, she chose instead to hit my mother with her purse.

Still and all, when I wonder at the seed of faith planted in me, I believe that it must have come from Honey and her sisters and my mother, and have been passed along by deeply held beliefs that came out in how they lived their lives. I recall Honey drawing up her petite frame, saying, “There’s no excuse not to keep a back straight,” even though she had been facing at the age of 70 losing a business, her savings, and her husband’s dialysis. It was for me mostly seeing how these women of my family carried on. With all their challenges, they got up each day, faced some hard times, and kept on going, doing the best they could with what they had to be kind and helpful and graceful. That, I think, is living faith.

As silly as it sounds, I think of all this when I look at Honey’s rose, it’s long canes stretching upward to the sun.

2 thoughts on “Warm, Bloomin’ Fall in the South”