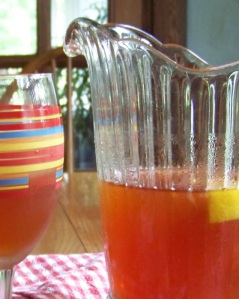 This photo has nothing to do with this post, other than another thing I'm doing is drinking a lot of cold tea to keep me writing. Hot days lend themselves to writing.

I’ve been absent from the blog because I’ve been writing. I’ve discovered that if I want to write on a new book, as well as some other bits and pieces, I have had to cut down on other activities. I am a person very easily distracted. I’ve also cut down on television watching and correspondence, making way for the hours I need for to focus on the crucial beginnings of a new book. First things first. And frankly, I find myself quite relaxed without jumping all over the web.

However, I’ve received a lovely letter from Joyce C., who asked me to repost the Great Pantyhose Debate. She put simply ‘pantyhose’ in the subject of her email, knowing I would instantly know to what she referred. If you have read my novel, Chin Up, Honey, you may likely also know the story. (Begins on page 102) The debate actually took place in 2007, with my dear Big Mama.

If you have read my blog, you know that we lost Big Mama last month. It is a joy to share this memory of a cherished time. Have a chuckle with Big Mama.

The Great Pantyhose Debate, or whhyy would you do that?

Do you wear your pantyhose with panties under them, or without?

This question came up on a visit to my dear mother-in-law. She and I were talking about how different things are now than when each of us was young. My mother-in-law is seventy-nine, so obviously a lot more has transpired for her than I, but one memory we each share is the advent of pantyhose.

My mother-in-law said, “You know what I like best about pantyhose? You don’t have to wear any panties with ‘em. I mean, the panties are built right in.”

I agreed in a more or less automatic nodding fashion. I was reclining on the couch, my mind drifting into the past, remembering far back to the an early age and girdles and those things, whatever they were called, to which we attached hose. My mother-in-law brought me out of this reverie by speaking ardently.

“You know, one time I was ridin’ over to church with Doris and Delphia, and I mentioned how the best thing about pantyhose is not havin’ to wear panties under them. And that Delphia said, ‘You don’t wear panties? I do.’ She said it like that and looked at me like I was nuts. I said, ‘Well, Nooo! Why would they call ‘em pantyhose, if you were supposed to wear panties with them?’”

In order to get the complete flavor of the conversation, you need to know that my mother-in-law is a true matriarch of the family. A woman of faith and good sense, she has been the guide for the family for many years. Since the birth of great-grandchildren, she goes by the title of Big Mama, not for physical size but for spirit size. She is a woman of strong convictions, who doesn’t hesitate to share them, with no apologies, and generally in a voice that no one has a hard time hearing.

“I know Doris wears those cotton panties,” said Big Mama. “Lord, they’d be uncomfortable under pantyhose…all bunched up. I told them, ‘Wwhyy would you want to wear panties under pantyhose? They have that cotton insert. That’s why they call ‘em pantyhose. And you can’t see anything under them.’” They said they didn’t know. They just did. I just can’t imagine. Don’t you think most wear them without?”

I said that I thought most people didn’t wear panties. Although, then I started to wonder.

I said I just didn’t know.

Shortly, my sister-in-law, Carolyn, arrived. I felt the need to ask her if she wore panties under her pantyhose. I couldn’t help it.

“Yes, I do,” she said, nodding calmly, as if asked this question every single day of her life.

“You wear panties under your pantyhose?” Big Mama said, and in a way that I would have corrected myself, if I had been Carolyn.

“Whhyy would you do that? They are panty-hose! The panty is built right in. That’s why they are called pantyhose. You’re not supposed to wear panties with them.”

“Well, I don’t know why anyone would do that.” She puzzled this over, aloud, for a few more minutes.

When my youngest sister-in-law, Sharon, and her grown daughter, Tanya, arrived, I eagerly put the question to them.

“Well, yeah, I do,” Sharon said, and giving a puzzled laugh.

Again Big Mama was aghast. I was surprised. I was beginning to wonder about me and her.

“We’re loose women,” I said, and Big Mama instantly repeated her strong views about the panty being sewn into the hose, and no one was supposed to wear panties with them.

Tanya explained that she never wore pantyhose anymore, but, “Big Mama, when I was little and you made me wear them to church, you made me put panties on under them.”

“You made me wear them.” Tanya injected.

The age old question of what might happen if you’re out and get in a wreck was brought up. Carolyn asked me what I would do if all I had on was pantyhose and no panties. I answered that I had never thought about it. But I began to feel a little anxious about the prospect. Big Mama maintained her position that pantyhose was the same as panties and should not be worn with panties, and put forth that not having panties on would make things easier, should one be injured and have to jerk the pantyhose off.

I grabbed a tablet and began a count. We currently stood at two Without and five With.

“I’m goin’ to call my mother.” I grabbed my cell phone.

My mother had not worn pantyhose on a regular basis for well over twenty years, since she retired from waitressing, however, when she had worn them, she had worn panties, most definitely. I got the impression wearing pantyhose without panties had never occurred to her, ever.

Big Mama took this in. “Well, I just can’t imagine why anyone would wear panties under pantyhose. Whhyy would anyone do that? You just tell me,” she demanded of each of us, not that any answers changed her mind.

She then picked up the phone and called her pastor’s wife. We all listened, and watched Big Mama’s face. Her voice dropped, “Oh…you do. Well, we were all just talkin’…Thank you.” She hung up quickly, momentarily deflated.

I decided to call a friend, who was born and raised half a continent away, and could definitely give an outside opinion. I was certain we would finally get someone on mine and Big Mama’s team.

I returned to the living room and was met with Big Mama getting out of her chair and looking at me with bated breath. “What did she say?”

Big Mama stared at me.

The next day when we dressed for church, I still didn’t put on panties under my pantyhose, and neither did Big Mama. Now, though, I was a little concerned of what might happen should we get in a wreck.

“I’m drivin’ real careful,” I told Big Mama. “I sure don’t want to get in a wreck and us get caught without panties.”

To which Big Mama said, “Well, I just can’t figure out whhhyyy anyone would want to wear panties. You’re not supposed to. That’s why they call them pantyhose.”

Just to give you a report— we didn’t dare ask anyone at church that Sunday, but my sisters-in-law and I continued the poll for some weeks. It was interesting. We polled young and older. Age seemed not to matter. We ended up with a piddling 4 Without panties, and a whopping 24 With.

In the twenty-four With category are two people who sometimes wear panties underneath their pantyhose and pull on another pair on top of the pantyhose. I guess we can call these Double With.

“Whhyy would they do that?” we all ask.

One of those polled reported: “Well, I wear panties under my pantyhose, unless I’m out with my husband, and then I don’t.” We are not going to ask further.

Please feel free to comment with your preference, should you feel bold enough to do so. Big Mama sure would.