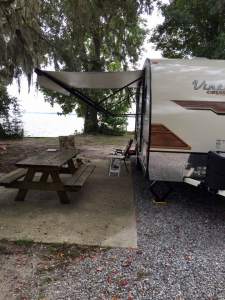 Yesterday I brought ‘Little Lucy’ home from the dealer, where she had undergone warranty work for a number of factory-related issues. I arrived happily in my backyard with high confidence. I had once again traversed the highway without incident, and while I knew it would take me time to back her into the carport, I had two previous successes to boost me on this score. I knew I could do it again, and once again I needed to do it alone, as no one was there to help me. I also needed to be a little quicker, as I was scheduled to pickup grandson from school.

Right away, I remembered to remove the sway bar—progress! I tried pulling forward at a different angle to give me more room, however the maneuver did not prove helpful. Still, I kept myself patient and took my time, thinking carefully on which way to turn the wheel in order to get the trailer to go in the direction I needed.

“Hand on the bottom and the steering wheel. Move it the direction you want the trailer to go.”

Up and back, up and back. Just be patient, don’t get in a hurry.

I was disappointed to find I had not made a lot of progress in getting the trailer to go as I wished. Somehow I kept getting the truck at an angle, which made Little Lucy go backward at an angle.

Up and back—hoorah I got her in the general area! I was able to back closer to the carport, but I was still too far over to the left. Then too far over to the right. Then I’m lined up pretty good but still heading at an angle. Be careful of the side of the carport! Visions of crumpled trailer and garage coming down flicker across my mind. And the clock was ticking.

Up and back in the area of the yard that is soft and muddy from all the rain we have had this summer. Soon it was squishing under the tires. Then forming deep ruts. And then the tires spun loudly in the mud.

I pulled forward and shoved the gear shift into park, too fearful to go back again, lest I get the truck stuck in the mud. I looked at the clock and thought how long it would take me to unhitch the truck from the trailer, once I did get it into the carport—and it had to go into the carport, because the pecan trees are losing limbs willy-nilly. I was afraid one would fall on the trailer. I feared I could not make it to school to pick up my grandson. In fact, at the rate I was going, I might still be there at midnight, and in a deep hole. My writer’s mind instantly imagined a huge truck having to come pull me out.

Defeated, I crumpled on the steering wheel and sobbed. I couldn’t do it alone.

I called my son, sobbing, and asked him to pick up my grandson from school because I was stuck with the trailer in the backyard. He told me to calm down and take a break. I got out of the truck, refused to look at the accusing mud, and went into the house and threw myself on the couch and fell instantly asleep.

When I awoke a half an hour later, I dragged myself up, got some lemonade and called my friend, Laurie, and sobbed to her my tale of woe and misery, as only a dramatic writer can sob of woe and misery.

Laurie, bless her, responded by being the voice of good sense. “It is just this one time. It’s a snag, that’s all. The ground being soft threw you a curve but you will get it. You’ve done it twice before. Now, you are going to have to ask for help. Ask a neighbor to help direct you.”

Sitting behind the wheel in my truck once more, I looked over at the neighbor’s house to my east. No one appeared home. I was reluctant to call the neighbor across the street who I thought might help—the only one whose phone number I have. I didn’t want to be a bother.

My mother’s comment that very morning sprang to mind—as I was attaching her foot rests to her wheelchair, she said, “I don’t mean to be a bother.” People say this over and over, as if we need to apologize for our human need.

I was face to face with the truth that as a widow, I feel I must to do life on my own, be responsible and take care of myself. I did not want to be a burden and bother to family and friends. I stubbornly refused to ask for help.

I also felt that if I was going to have a travel trailer, I needed to be able to do all that having one required, and if I could not, then I had no business having one.

Who made up that rule? Where did I get it?

My thinking was wildly distorted by pride of expecting myself not to be human. In fact, I was thinking I needed to, and actually stood a chance of, being Super-Woman.

The truth is that I am a woman alone, and I’m an aging woman alone. There are going to be many things I can’t do, but that doesn’t need to stop me from doing what I can. And that is a truth that all of us on the planet share in one way or another. We each need help on a regular basis, and sometimes we need it more than others. Such is the human condition, and our blessings to each other.

At that point, I remembered to ask for God’s help.

And then I telephoned my neighbor across the street to ask her help. But she did not answer.

Okay, then. I took a deep breath and got out to retrieve a couple of dead palm branches. I put them in the mud for the tires to roll over. That method worked well for traction; I heard crunching rather than spinning beneath the tires. I managed to maneuver the trailer back to the edge of the carport, but when I tried to push it up on the concrete, tires went spinning in both mud and wet grass. Not to mention, I was a bit crooked and afraid I’d send the trailer into a post.

Then I would simply have to wait for when my son or someone else could help me. It was no catastrophe.

Just then the phone rang. It was my neighbor returning my call. I explained my need and she immediately came over. With her directing, and in about five quick minutes, I got Little Lucy safely and neatly into place.

More lessons learned by way of my travel trailer desire. Sometimes I’m going to need help, but that doesn’t mean I’m helpless, nor a bother, nor terribly flawed and unusual. It means I’m part of the human race.

“What do we live for, if not to make life less difficult for each other?” ~ George Eliot

Also, Laurie said, “Let’s go shopping for one of those portable carports. That way you won’t have to back up but can just pull through.”