Daffodils are coming up all over the place around here. Even right in the lawn and pathways where we walk. 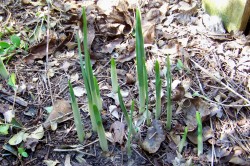 I was surprised to see them coming up at this time of year. Where I have lived, much further north, they did not sprout out until spring. Then I read that this is normal for down here. I guess they sit around all winter, waiting for spring to bloom. I’ll be watching them.

And these, loropetalum, I think. See their flowers. They look rather multi-colored in the pic, but they are actually a solid bright magenta. I pruned them, and then they came on with the flowers. What a lovely surprise. 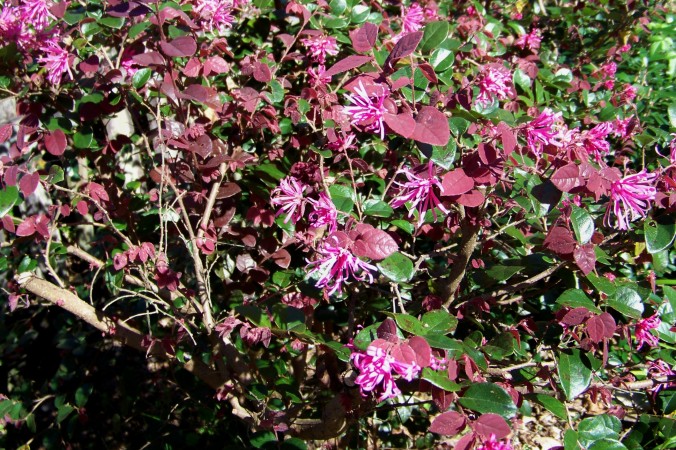 The azalea by the pond has bravely been putting out blooms, one here, two there, all fall.

We have moved my mother down from Oklahoma now. She has, of course, been uncertain about this new arrangement of living with us. She especially wanted to have a microwave in her bedroom so that she could have her morning instant coffee in peace. Having embraced the invention of instant coffee when it appeared (what? ’50s?) she has drunk this coffee for the majority of her 83 years.

This morning my mother came into the kitchen, saying, “Coffee smells good.” Surprise! Since moving in, she has not even opened her instant coffee, preferring instead Bigstreetrod’s brew–stick the cup to the maker spout and it fills. I guess that’s pretty instant.

I’ve learned that when something looks very dire to remind myself: “One never knows what might happen. Expect a good surprise.”

Now I have to post this and run outside and look at the daffodils, see what more may have sprung up. I look everyday. This new home is sure a constant surprise.

5 thoughts on “Open to Surprises”