Happy Fourth of July to all!

When we got our flag out, it suddenly occurred to me that I am, somewhat, living in reality what my characters lived in my Valentine stories. If any of you have read my novels, you might remember Valentine was ‘flag town USA’, and everyone flew their flags proudly and said the pledge of allegiance at ball games and rodeos.

The pole we have for our flag has a plastic cylinder that supposedly helps the flag not to tangle itself, however it never did work right. Then I went and broke all the plastic clips when I was attempting to put out the flag a few weeks ago.

Ah, but dear Fixitman took a thoughtful long look at the setup, went to Lowes (where veterans get a discount!) spent time in the plumbing department of all places, and came back with the answer. He used some sort of plumbing clamps, and the flag flies better than ever. 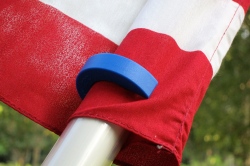 That’s what America is all about. It was begun and has continued by men and women with imagination and ingenuity and fearlessness about rolling up their sleeves and going to work. I pray it always be so.

Those who expect to reap the blessings of liberty must undergo the fatigues of supporting it. ~ Thomas Paine.