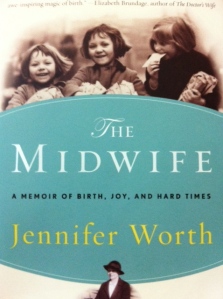 At this season’s finale of the BBC series, Call the Midwife, I was left holding my addiction to the program. I had been enthralled from the first episode, which I had watched on my computer, then gone on to watch them all, one after another, as I never had any other television show. I rarely watch anything current on television, finding most of today’s entertainment far too harsh and negative and just plain unpleasant and stupid. On the other hand, it can be argued that Call The Midwife is not so current, the setting being the 1950s. (Bravo to BBC for the excellent job!) While the realities of life in the time and place of the series were often harsh, the main characters are valiant and kind and lovable, and they even pray (gasp!). There is so much triumph in the stories.

But this post is about the book, The Midwife, by Jennifer Worth, the first of a series of three memoirs and on which the BBC series is based, telling of Worth’s experiences as a nurse and midwife in London’s East End in the 1950s. It is a time of rapid change, as well as scarcity in an area striving to recover from the ravages of bombing during  WWII. The stories from the book are almost exactly as those of the television series, but with the benefit of Ms. Worth’s warm and clear voice. I could probably read a grocery list written by the woman and be happy just to hear her use of words and descriptions.

The tagline of the book reads: a memoir of birth, joy, and hard times. I would have rearranged those words to be birth, hard times, and joy. For Jennifer Worth shows that certain joy that passes all understanding that comes with facing adversity and human perplexities, perversions, and needs with courage and wits and heart.

This book humbles me. I and most of my family have enjoyed a life of ease compared to what women of that era and space had to contend with. Any time I start complaining, I just have to think about what some of the women and men of that era endured. Shuts me right up. And the book encourages me; what has been done–triumphing in tough circumstances– can be done again.

2 thoughts on “Book Recommendation: The Midwife, by Jennifer Worth”