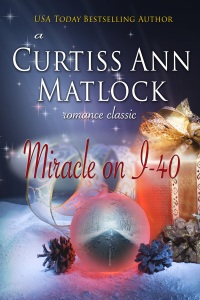 On sale at 99¢ in Kindle now! And this year back in print!

I am very much like Anna in this story— there exists in me a fair sized piece of the child who still believes in Santa Claus, even though my heart has been torn and battered over the years. I’ve always thought, as does Lacey in this story, that Christmas is just a darn good idea. It is a focus on love. Nothing can be better than that. And this focus on love has continued to shine and grow now through 2,000 years. There’s magic in that in this old world.

My experience with this book, Miracle On I-40 began some 25 years ago now, with a telephone call from my editor. To have a call from my editor always sat me up straight with excitement. I was going on like gangbusters back then, intent on a career as a romance novelist.

“Would you like to do a novella for us? A Christmas story for a special collection.”

“I live for Christmas,” I told her, delighted with the idea and with being asked.

“I had an idea that was the case,” she replied in a dry tone that caused me to wonder at her view of me.

Then she told me, “It’s only twenty-five thousand words. You ought to be able to get that out in a few weeks.”

Thankfully, though, I had nearly six months before a deadline. Good thing I did, because I shortly discovered the disconcerting reality that I am a novelist. It is a great fallacy to think just because something is of few words, it is easily written. I find the exact opposite is true. Writing a short story required that I think, well, short. I worked and prayed and worked and prayed, and grouched and sweated and fumed a lot. 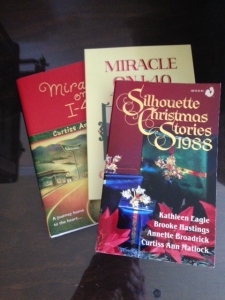 Miracle On I-40 — a title my husband thought of — was published as part of a special anthology for the Christmas season of 1988, when my son was eleven and no longer believed in Santa Claus but still enjoyed that I pretended to do so. The story received a few good reviews in romance publications, nothing spectacular, but the anthology did see well over one hundred thirty thousand copies in print in the United States alone, and eventually went into worldwide publication. I consider that something of a miracle. I received a few letters and kind words from readers, and then pretty much forgot about it in the effort of writing other stories, in the manner of every working writer.

Then one day, in a most delightful fashion,  I got a call from my agent. “They want to reprint Miracle On I-40 as a single and special promotional gift.”

So in the early new decade of the nineties, the small story saw renewed life in a few thousand copies as a single paperback gift edition, with Christmas ribbons and holly on the cover. I saw a copy once, and that was all.

After that, on occasion a reader might mention to me having read the novella, but mostly it was retired to gather dust. I again forgot all about it, until 1998, when I had the exciting opportunity to revise and expand the story of Cooper and Lacey and her children, and to see it published as a larger gift book, with a friend who owned her own small publishing company. It got enlivened with tender illustrations from an artist friend, too. I was thrilled. Again it made no great splash, although this time I did get a few nice reviews from a number of small town newspapers to put in the old scrapbook.

Click to link to the print copy at Amazon.

2005 arrived, and the little story that had started out as a tiny novella once more got revised and enlarged, and my publisher at the time, Mira Books, put it into an elegant hardcover gift edition for the Christmas season. One Christmas, and again it went out of print. But the times were moving rapidly–digital was here! I secured the rights returned to me and the story went into ebook, thankfully, available forever.

Now this year, I’ve seen yet another miracle with this story–I was able to get it back into print. Ebooks, are good, don’t get me wrong. I read them. But for me, there is nothing like a printed book. How gratifying to hand a book with pretty colored cover and printed pages to a friend as a gift! How comforting to curl into a chair with a cup of hot tea, with a solid book.

So here we are at 2014, and I once again share the story of Cooper, Lacey, and the children, and what happens with these four ordinary people one special Christmas that helps to heal their wounds of the past and give them a hope for the future.

People talk about the commercialization of Christmas, but I for one am ready early this year and love going into the stores to see all the Christmas decorations. I already had on Christmas music the other day. My two Christmas stories are my contribution to the precious comfort and joy that this season can bring, when we open our hearts to believing.

Enjoy as much of the coming holidays that you can.

2 thoughts on “Bestselling Christmas romance, Miracle On I-40 at 99¢ and now in print!”